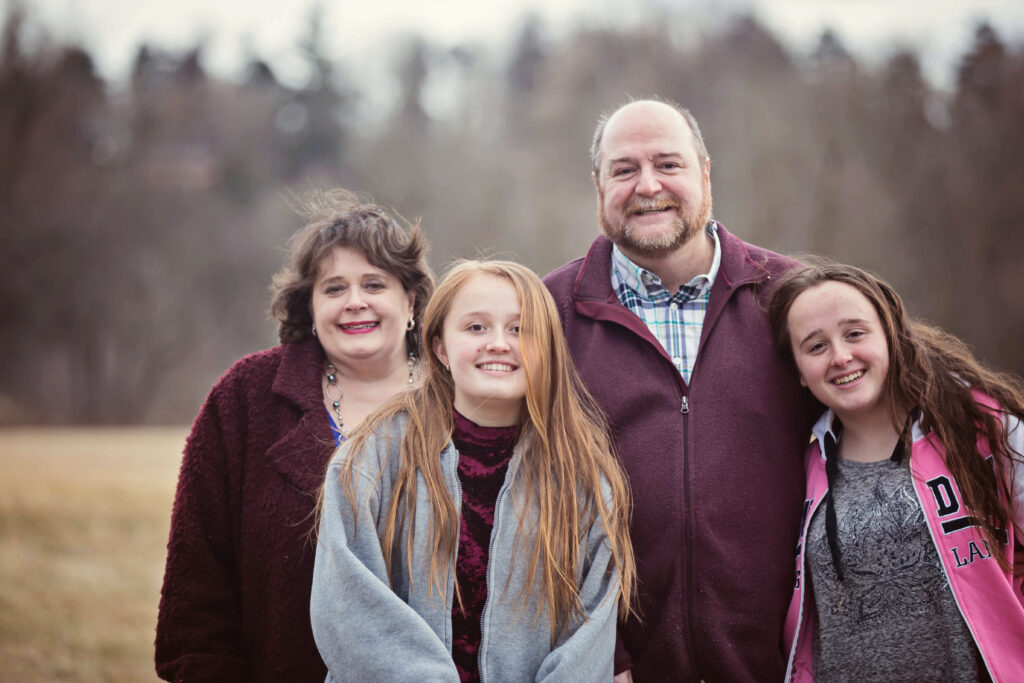 In December of 2016, at the age of 46, I was supposed to begin an exciting new chapter in my life. After a year working with contractors and city inspectors, I finally opened the doors of my brand new business.  Fifteen days later I was in my doctor’s office because of violent nausea, balance issues and most frightening of all I was losing my sight.  My GP immediately sent to me to an amazing optometrist who saw that extreme pressure was building in my optic nerves, and that I was at significant risk of going blind. Needless to say, I was terrified… but I was so ill by that time that I really didn’t have the wherewithal to panic. The optometrist wrote us a letter with his findings, and sent us to the Emergency department at Toronto Western Hospital where I was diagnosed with an aggressive ping pong ball sized Acoustic Neuroma– a brain tumour.

I was sent home with an appointment to meet a neurosurgeon the following week, but as my sight steadily disappeared and symptoms rapidly worsened, I returned to emergency. And because the very rare and very large brain tumour wasn’t enough, I learned that I had an even rarer complication from the Accoustic Neuroma called Idiopathic Intracranial Hypertension. The doctors realized in addition to the brain tumour I was under immediate risk from excess craniospinal fluid (CSF) that had settled in my eye sockets and was the immediate cause of the blindness. I didn’t even hear the word “hydrocephalus” until months later. I honestly don’t remember very much of this period, but it began with multiple surgeries to insert stents into inflamed arteries in my brain, and a shunt to drain the CSF fluid into my abdomen. As it turned out the actual brain tumour surgery had to be delayed for six months to give my brain time to recover from the damage caused by the hydrocephalus and the shunt and stent surgeries.

I spent months in the ICU at Toronto Western, in and out of consciousness. My 83-yo Mother came every day and sat with me, waiting for those infrequent moments when I would wake up and be coherent. My husband found himself working thirteen hour days seven days a week as a reluctant entrepreneur, and sole proprietor of my business until I got well. Since my husband was running the business alone, I only saw him and my twin 12yo daughters on weekends when they could drive to Toronto.

By spring 2017 I was able to travel, so I was transferred to Bridgepoint Health for rehabilitation to learn to manage my new reality… I was now legally blind, and had serious balance and mobility issues to overcome. I did as much work as I could to cooperate with the staff in every possible way, while longing desperately to go home to my children. After a few weeks I had improved enough to get out on weekends and finally to go home in April. Of course, this was with the understanding that I’d be back at Toronto Western soon enough for the brain tumour removal surgery. I was pretty useless, but reasonably content at home: sleeping, recuperating, attending rehab sessions at my local hospital, and waiting for my tumour surgery to be scheduled.

Eventually mid-August arrived, and I was back at Toronto Western to remove the tumour. After eight hours on the operating table my brilliant neurosurgeon removed about 90% of the tumour, and preserved my facial nerve which would have been severed if he’d gone for the last 10%. I am so grateful that I didn’t need to learn how to speak or smile all over again. Unfortunately to reach the tumour the surgery required the removal of one of my inner ears leaving me partially deaf. After more time in ICU and more months of hard work at Bridgepoint, I found myself back home at the very beginning of what would be a long, steep road to recovery.

Despite my efforts to speed up my recovery, it would be more than another year before I could go back to work and into some semblance of a routine— but my medical adventures weren’t over. In January of 2019 my husband realized something was wrong so he called an ambulance and argued/begged for me to be taken to Toronto Western. I am sure this saved my life as it turned out I was dealing with a shunt malfunction which required my 7th neurosurgery in just over 2 years.  Thankfully I came out of it with positive results, and was out of the hospital after about a week. A short stay at Bridgepoint for some more rehab, and I was home again feeling lucky to be alive…. and also unable to shake the feeling that there’s a giant target on my back.

By spring of 2019 I was back working regularly, doing my best to make up for my lengthy absence from my business. We were making some great progress, but when the first Covid 19 lockdown hit we just hadn’t grown the business enough to weather the Covid storm. So, with heavy hearts we made the decision to close the business and walk away.

I have always looked for the silver lining in any cloud, so I decided to put this last year of Covid to good use. I’ve had time to focus on my own rehab, in particular spending a lot of time walking and moving to regain my strength, balance and stability. I also made the decision return to my first love, the not-for-profit sector. That motivation led me to Hydrocephalus Canada, where I joined the Board and have taken on the role of Fundraising Chair. Despite a two-decade career as a professional fundraiser, I have never had the opportunity to work with an organization whose mission touches me so directly, and it is a truly amazing feeling. I’ve had the honour of working with the incredible staff and other Board members on fundraising initiatives, and planning how we can grow revenue generation to better serve the hydrocephalus and spina bifida communities.