Hydrocephalus Canada’s story is still being written. There have been 25 more chapters added since this article appeared in Current Magazine in 1998. Enjoy this look back at where we began. Keep an eye on our newsletters, website and social media for more of our storied past as our 50th anniversary celebration unfolds. 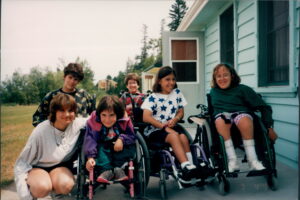 In the beginning, the Spina Bifida & Hydrocephalus Association of Ontario, SBHAO’s, founding families wanted a link with parents at the hospital, because they knew what little information they had been given when their children were born. Now, here we are twenty-five years later, everyone remembers the incredible bonds that were forged.

Twenty-Five years of hopes and dreams, and SBHAO is stronger than ever. Today the survival rate has increased for people with spina bifida and/or hydrocephalus. We offer a scholarship program, webinars on relevant and timely topics, a library/resource centre and numerous youth, adult and parent support programs. What started in 1971 as impromptu meetings of concerned parents that lasted till midnight, has become a sophisticated association of parents, children, activists and volunteers who are very committed to a cause. Some are well connected, others merely dedicated. Whatever the level of involvement, it is the people who have made HC what it is and have put it where it is today. 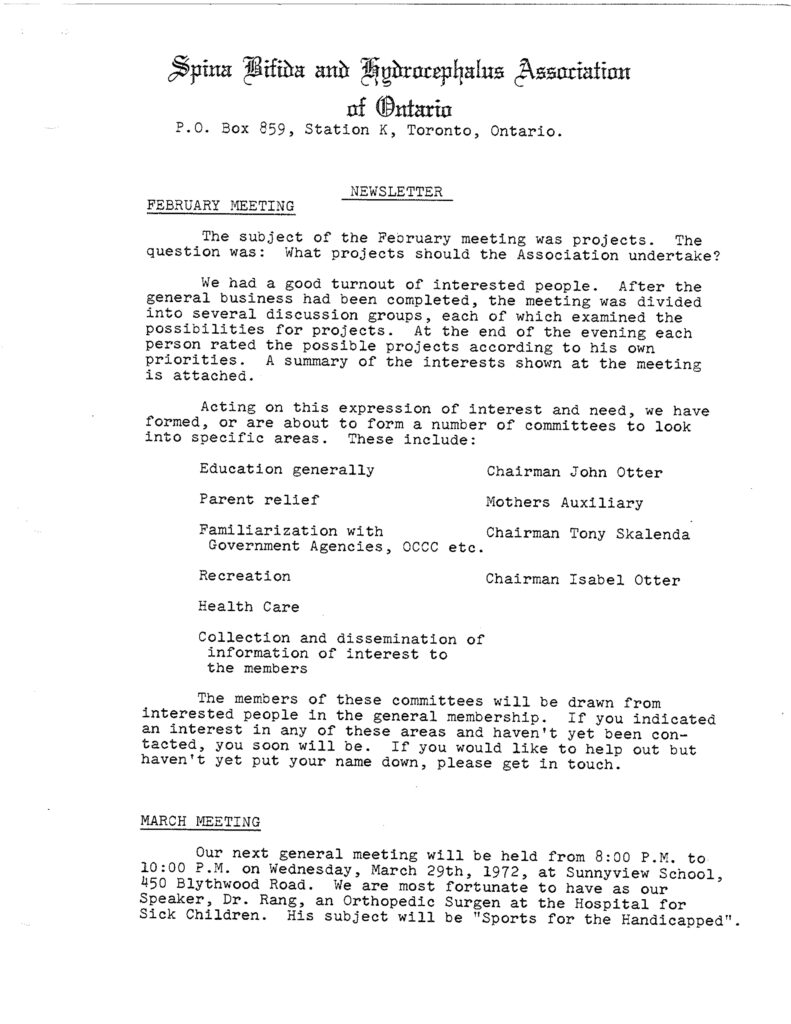 Mike Bailey remembers. The 77-year-old lives in Peterborough today, but in the early 1970s he and his family lived in Toronto. It was the youngest of his five children, Tim, who indirectly brought about the formation of the association. Tim, 34, is a legal assistant living in Toronto. He has spina bifida and hydrocephalus and uses a wheelchair. He attended Sunnyview School then, a facility whose students had one of three disabilities: muscular dystrophy, cerebral palsy, or spina bifida/hydrocephalus.

‘The most important objective back then was to find out why this birth defect happened,” says Mike. “And we also felt it was important to have an association of parents to identify our needs with the government.”

So a board was elected, and President Mike began his annual treks to the American spina bifida confer­ence to keep up with the latest developments.

Maureen Gibson, 47, is a financial analyst for the Ministry of Health. In 1977, she became involved with SB HAO and has the distinction of being the first adult with spina bifida to be president and the first to have a two-year te1m (1981-83). Maureen remembers that at that time there was still debate about whether people were “handicapped” or “disa­bled,” and there was an organization known as the Ontario Society for Crippled Children.

“Hearing that really got me going and lit my fuse,” she says. “At the first convention I went to in ’78 a speaker from a national organization used that term. I challenged him and got applause.”

Day-to-day operations at SBHAO were somewhat different than they are today. Maureen says “there was no office and no staff. One of the goals when I first joined the board was to get an office. We got a one room office at Trinity Square. It felt wonderful to get an address to put on your business card.” 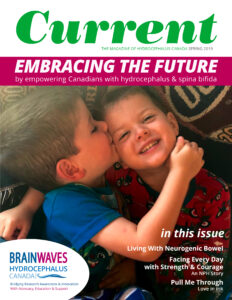 The magazine of the Spina Bifida and Hydrocephalus Association of OntarioIn terms of accomplishments over the years, Maureen feels the newsletter “was always very, very informative and a way to keep a large province with many small communities connected. In the late 1970s, the newsletter was photocopied and stapled, but it would be 20 pages of very good information. It was geared for a lay person, but it was substantive.”

Janet Baker, 61, was editor of the newsletter from 1973-75. She became president in 1976, while husband Gordon Baker succeeded Mike Bailey as president in 1972. The Bakers found their way into the organization because their son Gary had spina bifida and hydrocephalus. When he was born, the doctor told them that he wouldn’t live. He died three years ago at age 29.

Gordon has nothing but praise for the work Mike Bailey did in pulling things together initially. “He deserves a lot of credit; he single-handedly got things started,” says Gordon.

Janet says that in the beginning the founding families wanted a link with the parents at the hospital, because they knew what little (or non-existent) information they had been given when their own children were born. “We tried to get the doctors to tell the parents about the association,” says Janet. “We got spina bifida newsletters from all over the world, and we were always exchanging information. Bowel and bladder management was a huge issue for everybody.”

One of the things that everyone remembers from the early days is the incredible bonds that were forged with fellow parents. Gordon Baker can go farther: he credits SBHAO with allowing his son to live a full and good life.

“The biggest support was to talk to other parents who were going through the same day-to-day problems, and to hear how they coped and how you could cope. The fellowship among the parents was very important,” he says.

In the mid-1970s Mike Bailey set up a foundation at Sunnyview School to create funds that would in turn provide equipment for the many financially disadvantaged children (approximately 60 per cent of the children at Sunnyview at that time were from single-parent families). Despite dire predictions, the Sunnyview School Foundation for the Physically Handicapped today has an endowment of about $500,000, from which the interest is used for the school. He would prefer to see SBHAO go the same route.

“I’d like to see SBHAO become the Spina Bifida Hydrocephalus Foundation because there’s far more credibility to creating funds,” says Mike. “My objective would be to bring in a tremendous amount of money that could be used towards research to find the cause of spina bifida/hydrocephalus. I’d feel much better if I’d been able to do something in my lifetime about finding a cause.”

Regardless of where people think the association should be directing its energies in the future, there seems to be a consensus that the ties with people that were formed in the beginning have been lasting.

Maureen Gibson remembers working with people on the board who kept her motivated and committed. “Funny, nice to be with, hardworking-they made long meetings enjoyable,” she says. “And I appreci­ated the opportunity to contribute. I hope that some of the younger ones got involved.”

“Even if you don’t see them anymore, we share a real bond with some of those people from the early days,” says Janet Baker. “You still feel for those kids and wonder how they’re doing. And even though the association has grown so much and become so professional, I don’t think it’s ever lost that personal touch.” 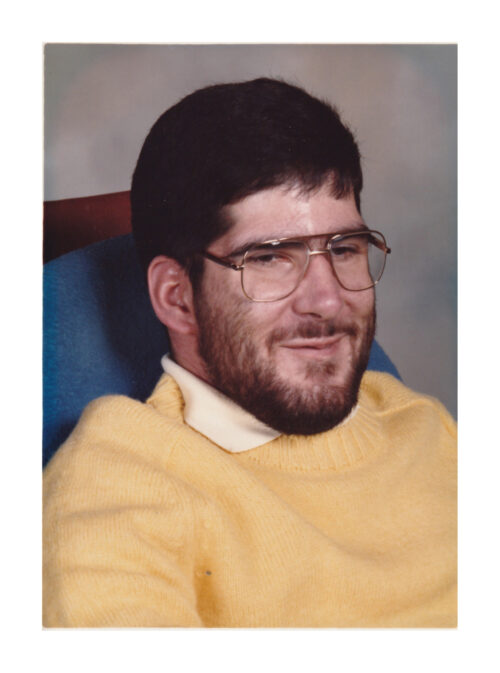 50 Years of Leadership: Our Past and Current Board Chairs  Our organization has benefitted from 50 years of leaders. Individuals who stepped up to guide us. Firstly, as parents supporting