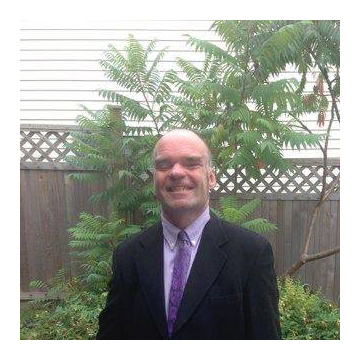 Michael Robertson is new to Hydrocephalus Canada, having joined in January. He became a member while searching for medical information on Facebook. He enjoys the regular updates through our newsletter and finds it helpful reading other people’s stories. In my first edition of Own your Story, Michael talks about living with hydrocephalus.

Fifty-three-year-old Michael Robertson loves life and considers himself a happy person. He grew up with hydrocephalus and spent a career as a courier. Through Toastmasters, Michael developed a love of public speaking.

Michael and his older sister Julie were born and raised in North Delta, British Columbia where Michael lives today. Both siblings were close to their parents, who have since passed away. As a child Michael enjoyed bowling with his father. His chores included mowing the lawn and helping with the dishes. He found school difficult because of a learning disability, but he went on to study electronics assembly at Douglas College.

While he is now retired, Michael enjoyed steady and consistent work for 30 years for a courier company. He travelled daily by sky train, as he does not drive, delivering to a couple of law firms.  It was his first and only job. He remained there until a series of falls made it too difficult for him to continue. He felt accepted and appreciated for what he could do, not what he could not.

For the past three years, Michael has lived in a retirement residence. He has many friends there, including his close friend, John, who also has a disability. Michael’s favourite things about the residence are puzzle clubs and weekly bus outings, plus the daily routine and shared meals. At age 53, he is the youngest resident.

John and Michael watch movies and hang out together.  Michael also has a female companion, Vickie. They met at the Royal Columbian Hospital where they were volunteers and taking a course on feeding patients who were bedridden. The couple has been together for 15 years, but have not seen each other in person since the pandemic started.

Michael lived in his parents’ home until the stairs became too difficult to manage. While there is no medical care provided at the retirement home, he has his own family doctor and neurosurgeon. He keeps fit with daily walks through the halls of the residence with his walker.

Michael has had 23 shunt revisions to treat his hydrocephalus. The first surgery was at Westminster hospital the day after he was born. He recalls the worst surgery in 2001 when he developed an MSRA infection.  He developed epilepsy after a fall at home when he was 40, which he manages with medication.

Michael’s health has been stable for some time; however, about a year and a half ago, while in the dining room of the retirement home, he felt ill.  He went to his room to rest and fell on the floor, unconscious. John found him the following morning and got help. Michael’s sister suspected shunt failure and Michael was sent by ambulance to the hospital for immediate brain surgery.  Michael was hospitalized for four months and took a year to recover. Michael is grateful to John for saving his life.

Michael enjoys watching medical television shows; particularly ER. An episode on hydrocephalus piqued his interest and inspired Michael to write to NBC expressing his gratitude for featuring it.  In response, he received a letter from the show’s producers, which he has proudly displayed on his wall.

Joining Toastmasters Canada nearly a decade ago helped Michael to speak with confidence and ease. Since he loves music, especially the Tragically Hip, Michael researched and wrote about the Hip’s late lead singer Gordon Downie, which he believes is his best speech of all.

We can learn a lot from Michael, who is healthy, happy and making the most of his life. Life is what you make it, no matter what challenges it brings.